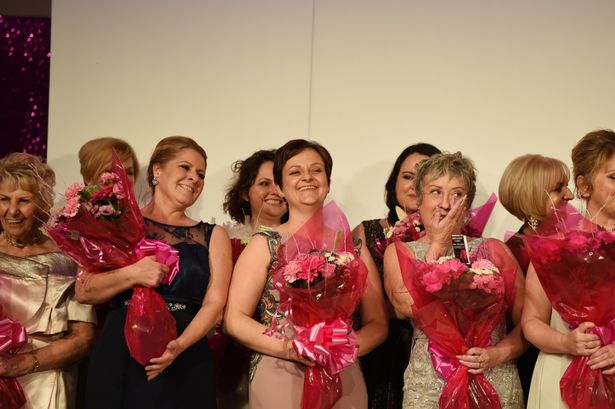 Eleganza Sposa were truly honoured and humbled to be asked to once again provide evening gowns for the finale of Breast Cancer Care's  "The Show Scotland". It was inspiring to dress these beautiful women to their ultimate potential in our stunning gowns. All 22 models, who ranged in age from 28 to 80, have each been affected by the disease with some still undergoing treatment and surgeries and others who are rejoicing being cancer free for several years. These brave women, along with one man, took to the catwalk to celebrate life after having the awful news of a cancer diagnosis and ultimately inspire others with the disease. They came together to raise awareness and funds for further research to help those currently suffering and save those who may be diagnosed in future. The talented Edinburgh-basedstylist, Ian Tod, dressed the models in our very own occasion wear collections. They all received star treatment from our marketing manager and stylist, Heather, in our luxurious Glasgow flagship store to find their perfect gown.

The fashion show took place at the Radisson Blu Hotel at the beginning of November to mark the end of breast cancer awareness month. It was an emotional night had by all and, as expected, each model was met with huge ovation and admiration. Model Nicola Foy, 36, of Glasgow, said, “It was such a confidence booster to step out on the catwalk and hear everyone cheer.” Marion France, 70, of Cambusbarron, near Stirling, added, “The support we received from the audience was overwhelming. I nearly broke down but it was wonderful.” These ‘real supermodels’ were joined on the night by actors Elaine C Smith and Clare Grogan and broadcasters Kaye Adams and Fiona Armstrong who have each been affected by this disease in different ways. Lottery winner Chris Weir, who launched a charitable trust after winning a £162million EuroMillions jackpot was alsoat the event and was so proud to have such a fantastic event here in Scotland. He continued, “The wonderful work carried out by Breast Cancer Care is a favourite cause of mine. They provide real care and support to people when they need it.”

Almost 900 people attended this event, including many former models from previous shows. This fashion show is one of the main fundraising event for Brest Cancer Care Scotland and their efforts paid off, with £170,000 being raised on the day. We were truly honoured to be given the opportunity to dress these inspiring women and help make this year’s show a real success.